An annual event meant to celebrate all things rhino, this year’s World Rhino Day had a worrisome tone. “Every single rhino is under threat of poaching at the moment,” said Barney Long of the World Wildlife Fund (WWF). “This slaughter of rhinos is out of control and threatens to undermine decades of conservation work and the livelihoods of those who depend on them.”

In South Africa alone, rhino poaching is up an unbelievable 5000% in the past six years. This year so far, poachers have already killed 635 rhinos in that country, just shy of the 2012’s death count of 668. Poaching for rhino horn is fueled by its current demand and high price—near that of gold by weight. With so much money at stake, poachers are in an arms race with rangers. The illegal hunters have night-vision equipment and sophisticated weapons that track and kill rhinos from great distances. In many countries, park and wildlife reserve rangers are outgunned and outmanned.

When Gabe and Grace Miller-Trabold visited South Africa they met conservationists working on the anti-poaching front, including Paul Mills. He helped the young travelers make a video about efforts by the STTU, a group of local trackers that help the police find poachers and stop the slaughter of rhinos. See what Gabe and Grace found out by watching their video: Youth Action for Rhinos 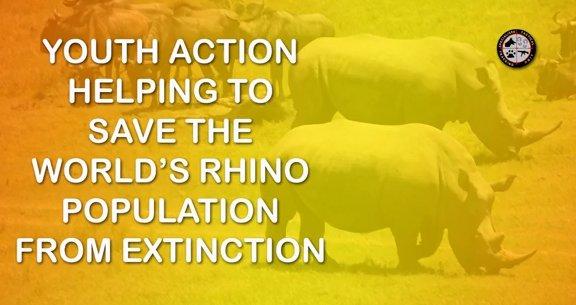