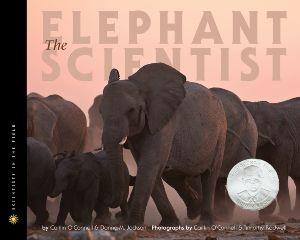 According to the Elephant Reintroduction Foundation, “On August 12, 2012, the inaugural World Elephant Day was launched to bring attention to the urgent plight of Asian and African elephants. The elephant is loved, revered and respected by people and cultures around the world, yet we balance on the brink of seeing the last of this magnificent creature.”

About 100 years ago, there were roughly 10 million Asian and African elephants roaming the earth, but it is currently estimated that there are about 20,000 Asian elephants and 500,000 African elephants. For more information, resources, and ideas on how to help (like adopting an elephant), make sure to check out Sibert Honor winning book The Elephant Scientist by Caitlin O’Connell & Donna M. Jackson, photographs by Caitlin O’Connell & Timothy Rodwell as well as these websites: