We Need More Bats in the Cave 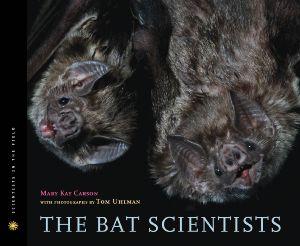 Since its discovery in 2006, White-Nose Syndrome (WNS) has infected millions of hibernating bats and severely reduced bat populations in the Northeast. According to White-Nose Syndrome.org, “WNS has killed more than 5.7 million bats in eastern North America. In some hibernacula, 90 to 100 percent of bats have died.” These numbers are devastating.

But perhaps the pendulum is swinging in the other direction for bats, at least for a colony in Addison County, Vermont that somehow survived WNS. A group of researchers are studying these bats to see if they hold possible clues about combating WNS in order to conserve dwindling bat populations. For a more in-depth look at research being conducted by Vermont Fish and Wildlife, visit here. Also, be sure to check out The Bat Scientists by Mary Kay Carson, with photographs by Tom Uhlman.