There Was an Old Frog Who Swallowed a Cricket 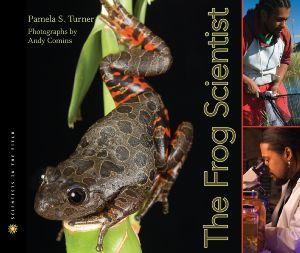 If you’re anything like Dr. Tyrone Hayes, whose groundbreaking research is the focus of Scientists in the Field title The Frog Scientist, you might find frogs fascinating–or at least fun to look at when you’re out exploring! Dr. Hayes’ work to prove the harm that pesticides like atrazine are doing to dwindling frog populations may have larger implications for human health–as Pamela S. Turner writes, “We don’t grow up in water. We don’t breathe through our skin….Yet we’re still connected to our environment, just like frogs.”

Although entirely different from Dr. Hayes’ research, one new study on the fascinating science of frogs was also inspired by watching their incredible behavior in the wild. As reported by Sean Greene in this Los Angeles Times article, scientists working at the HU Biolocomotion Lab at the Georgia Institute of Technology have made some startling–and maybe even gross–discoveries about frog saliva.

Anyone who’s ever watched a frog catch an insect as a tasty snack has been impressed by the speed with which frogs can nab their prey out of the air, using nothing but their long tongues. In fact, as the LA Times reports, “so sophisticated is the frog tongue that it’s capable of grabbing prey up to 1.4 times the predator’s body weight — a feat unmatched by any man-made device.” David Hu’s lab at Georgia Tech wanted to find out how, so they “attached actual crickets to strings and hooks” and “set up a high-speed video camera to record the tongue action in unprecedented detail,” under the leadership of study leader Alexis Noel, Greene writes.

What did they find? It turns out that “the frog’s super-soft tongue stretches out like a bungee cord and…wraps around the insect and covers it with sticky saliva before the victim knows what hit it.” What’s even more impressive, though, is the incredible way frog saliva works to trap insects: “When the slobbery tongue smacks its prey, the saliva becomes more liquid and spreads into all the cracks and crevices of its prey. As the frog retracts its tongue, the saliva thickens, making it harder for the prey to separate from the tongue.”

Just like in The Frog Scientist, this research from the HU Biolocomotion Lab may help us humans figure out some of our own problems; one early idea is to use our new understanding of frog saliva to “aid in the development of adhesives capable of rapidly grabbing delicate items, such as microchips, off conveyor belts without damaging them.”

Learn more about the fascinating, amphibious world of frogs in The Frog Scientist, from Pamela S. Turner and Andy Comins.