Now For Some Happier Rhino News 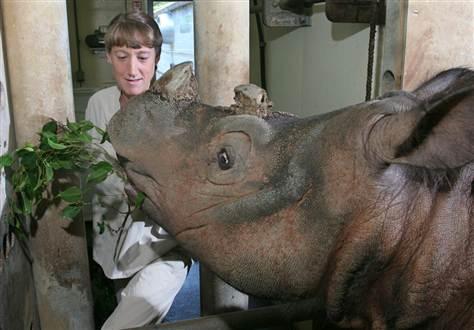 An incredible image has come from the jungles of Indonesia. It shows a rare Sumatran rhino, one just like the late Emi (from Emi and the Rhino Scientist, pictured, with Dr. Terri Roth) and her offspring Andalas, Suci, and Harapan — in the wild! The Sumatran rhino was thought to be extinct in Indonesia and one has never been seen in this region (East Kalimantan). The rhino has been captured on video twice and at this point researchers are unsure if the video is of one rhino or two different ones. Regardless, this is a bright spot in an otherwise bleak time for Sumatran rhinos (and their counterparts): there are thought to be fewer than 300 Sumatran in the wild due to poaching and deforestation.