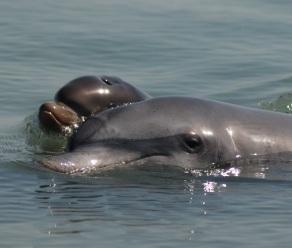 Just a few days ago, THE DOLPHINS OF SHARK BAY was released. The wild bottlenose dolphins profiled in the book–especially the younger animals–continue to change and grow. Readers may remember Dodger, a fourteen-year-old female who is one of a small group of dolphins who have mastered “sponging”. Sponging is a sophisticated foraging method that requires using a sponge as a tool. Dolphins only sponge if their mother is a sponger, which suggests that sponging is a difficult skill that requires observation and imitation. Scientist Janet Mann knew Dodger’s mother and grandmother and watched them sponge. Now Dodger has given birth to her first calf, Dudley. Welcome, Dudley, to a rich family tradition!

Samu is the four-year-old son of Puck, one of Shark Bay’s best dolphin moms. Young Samu is getting weaned off mother’s milk and becoming more independent. Janet Mann reports that Samu wants to join up with a group of older juvenile males that includes his nine-year-old brother, India. Although Samu is getting hammered by most of the other guys, India is taking it easy on his little bro.

In addition to Samu and India, Puck has two grown-up daughters, Piccolo and Kiya. Each now has a new calf. Piccolo’s is named named Piper, and Kiya’s is named Wirriya (which means “salt water” in the local Aboriginal language). The Puck family continues to grow and grow.

Those familiar with THE DOLPHINS OF SHARK BAY may also remember the infamous Nicky. In contrast to good mother Puck, Nicky is notorious for ignoring her young ones. Luckily, Puck’s extended family has always been there for Nicky’s neglected calves. Nicky’s five-year-old daughter Fin has now become the first of Nicky’s calves to survive weaning. Meanwhile Nicky has given birth to a new calf, Missel. The Puck clan has already taken little Missel under their wing (er, under their fin).