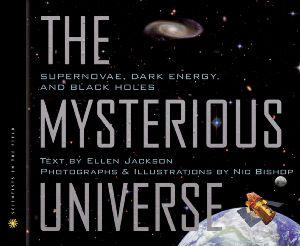 Since NASA launched the Hubble Telescope in 1990 it has sent images back to Earth that have changed way we see the universe.

And they are doing it again.

By the end of this decade, the James Webb Space Telescope will broaden our view of the stars in ways we have never imagined. Webb will be launched into space on a rocket, then disengage into orbit. With gold-leaf mirrors and a sun shield as big as a tennis court, it will unfold like a giant origami crane, then turn its back to Earth, to peer one million miles out into the universe!

In the meantime, you can follow the Webb’s development at the Goddard Space Flight Center, in Greenbelt, Maryland. And don’t miss NASA’s cool video simulation of Webb’s arrival and unfolding in space.

For clues as to what Webb might find, check out The Mysterious Universe: Supernovae, Dark Energy, and Black Holes, by Ellen Jackson, with photographs by Nic Bishop. What do you think will Webb show us? And how might it change the way we see the galaxy, the world, and ourselves?