Mission to Pluto Out Next Week 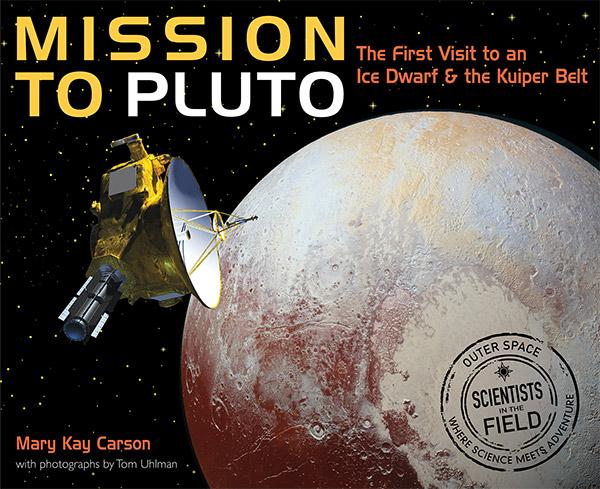 Happy new year, and happy new [SITF](/home book! Author Mary Kay Carson and photographer Tom Uhlman have teamed up for Mission to Pluto, a new title that has already earned a starred review from Kirkus, which notes that “the author’s enthusiasm shines through her clear, conversational narrative, and she quotes from personal interviews as well as press conferences and releases, extending the book’s intimacy.”

Out next week, Mission to Pluto is about the first ever spacecraft mission to visit Pluto and the surprising discoveries it made. As discussed in one of our previous adventure notes, the plucky piano-sized probe New Horizons reached Pluto in 2015 after a 9½-year journey. The book follows the team of scientists as they build, launch, and fly New Horizons three billion miles to finally arrive at the Pluto system of an ice dwarf planet and its five moons. Images taken by the spacecraft have given us a never-imagined look at Pluto. They show a reddish surface with ice-water mountains, glaciers, ice volcanoes, and hint of an underground ocean.

Mary Kay followed the mission from its 2006 launch, even sending in her own name to be included on a CD of Pluto fans that flew aboard the spacecraft! Be sure to read all about her once-in-a-lifetime opportunity to attend the flyby events and see the first images coming back from Pluto, and learn more about this remarkable Ice Dwarf, in Mission to Pluto. The book publishes January 10th.

Get a sneak peek of Mission to Pluto by checking out this amazing book trailer!