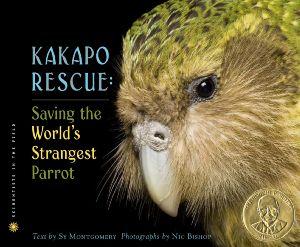 Readers of the Scientists in the Field series and bird lovers will remember Kakapo Rescue, the Sibert Medal winner written by Sy Montgomery and photographed by Nic Bishop which outlines the decades-long struggle to study one of the world’s most mysterious birds, and keep this New Zealand native species alive despite its lack of defenses against predators and a notoriously tricky time with reproduction.

As Montgomery writes, when Kakapo Rescue was published, the world population of kakapo was at “a new high: ninety-one birds.” In a previous Adventure Note, Kakapo Rescue Continues, we noted that “six years of hard work from the dedicated kakapo recovery program, and the population is at 125.” In a fascinating new article published in New Zealand Geographic, Decoding Kakapo, Rebekah White writes that there are now just over 150 kakapo “roaming free on three islands off the coast of New Zealand.”

White’s article details the first advances in the kakapo genome-mapping project mentioned in the Kakapo Rescue Continues post. White outlines how Jason Howard, an American neuroscientist who was already working with the B10K Project, was inspired to make kakapos a priority after reading–you guessed it–Kakapo Rescue with his daughter. Now he, along with the team of amazing scientists and volunteers at Kakapo Recovery, New Zealand Genomics, The Genetic Rescue Foundation, and many others, is part of the network of scientists across the world working to map the genome of every living kakapo.

As readers saw in Montgomery and Bishop’s book, the Kakapo face a number of challenges in reproducing, including a very small pool of genetic material to work with: “By 1995 there were only fifty-one kakapo on earth.” As White writes in her article, having genomes mapped will enable scientists “to investigate issues such as susceptibility to disease…be able to figure out how old the kakapo were, or perhaps pinpoint the problems they were having with fertility,” including which pairs of kakapo are too close genetically to produce the most viable offspring. In addition, scientists are hopeful that a clearer look at kakapo genes will contribute to our overall understanding of evolution!

Be sure to check out Rebekah White’s article, Decoding Kakapo, and learn more about this remarkable species of parrot in Scientists in the Field title Kakapo Rescue.