Dolphins Are Even Smarter Than You Think! 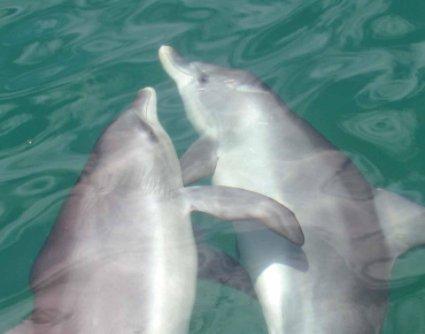 My upcoming book The Dolphins of Shark Bay looks at the lives of a community of wild bottlenose dolphins in Western Australia. As researcher Janet Mann notes, “Like us, dolphins have big social networks.” Over the course of a typical day a wild dolphin may interact with dozens of other dolphins and eavesdrop on the whistles and clicks of many more. And now new research from the University of Chicago suggests that dolphins can remember their friends even after decades of separation.

Long-term memory can be difficult to study in other species. But scientist Jason Bruck hit upon the idea of using recordings of signature whistles. Every bottlenose dolphin has a unique whistle that it uses when separated from family or friends, a vocalization that seems to mean “Hey, it’s me. I’m over here!”

The most astonishing finding? A dolphin named Allie immediately recognized the signature whistle of Bailey, a former tank-mate…even though Allie and Bailey had been separated for over twenty years!

Check out this video, entitled Dolphin Memories Last for Decades!