Dolphin Video Part 2: Is This Dolphin Asking For Help? 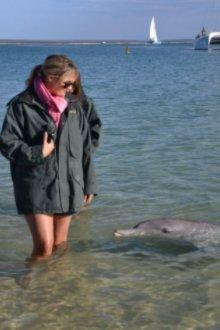 Is the dolphin in this video really asking for help? I was fascinated to see this video because I’ve been on this night dive off Kona in Hawaii. Shortly after sunset, the dive operators set up underwater lights on the seafloor in about forty feet of water. Scuba divers sit on a bottom in a big ring and shine their own flashlights up; snorkelers float on the surface while holding onto a floating bank of lights shining down. It’s very surreal—like an underwater “Thunderdome.” (If you look closely you’ll see plumes of bubbles from the divers on the bottom and you can see some of the snorkelers’ fins.) The underwater lights attract plankton, and the mantas swoop in to gobble it up. Reef fish also arrive to enjoy the plankton. I didn’t see any dolphins on my dive, but the local dolphins probably come by to feed on the reef fish. Is it unusual for a wild dolphin to swim right up to a diver? Yes. Most wild dolphins keep their distance. I suspect that the dolphin in the video hunts here regularly and has become very relaxed around divers and snorkelers. A scientist would say the dolphin is “habituated.” I was once diving in French Polynesia when a wild (but habituated) bottlenose dolphin swam up and offered me a piece of sponge—which she wouldn’t let me take because she wanted to play “keep away.” The dolphin wasn’t in trouble or pain—she just wanted to have some fun. She had figured out how to “ask” for a playmate by presenting an object to a diver. If a dolphin is that smart, maybe an entangled dolphin is also smart enough to “ask” for help by presenting an object it really does wants to get rid of. I also asked Dr. Janet Mann of Georgetown University about the video. Janet is featured in my upcoming book, THE DOLPHINS OF SHARK BAY, and she’s been studying wild bottlenose dolphins in Western Australia for over two decades. Janet identified the dolphin as a male and agrees that the dolphin appears to be habituated. “It does look like the dolphin ‘asked’ for help,” Janet writes. One last comment: You’ll notice that the diver in the video carries a knife. Divers don’t carry knives to protect themselves from sharks. Divers carry knives because they also get entangled in fishing lines! Check out part three, a blog post by author Loree Griffin Burns about how to help keep stuff like this out of the ocean in the first place here.