Big News for Scientist in the Field Scott Dowd 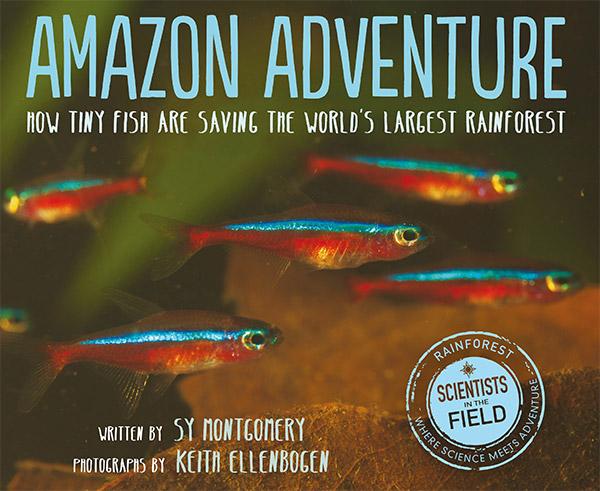 Amazon Adventure is one of the latest installments in the Scientists in the Field series, which follows world class researchers, teams, and intrepid scientists as they investigate the science behind the world we live in. From award-winning team Sy Montgomery and photographer Keith Ellenbogen, Amazon Adventure takes readers to the Amazon jungle.

The Amazon provides a fifth of the world’s oxygen, and is often considered the “lungs of the world.” Yet, “each year, mining, clear-cutting, burning, and cattle ranching destroy an area of Amazon forest twice the size of the city of Los Angeles,” as Montgomery writes. Luckily, that’s where New England Aquarium senior aquarist Scott Dowd, and Project Piaba, come in.

Along with collaborator Professor Chao, Dowd founded Project Piaba to provide locals already caring for the Amazon river with better resources. Called piabeiros, these individuals scoop up small fish–piabas–that would normally die in the Amazon’s extreme dry season, selling them as pets and keeping harmful industries like timber and mining at bay, as a result. These communities are serving as a first line of defense for the environment, and providing an example of a healthy, sustainable relationship between us humans and our natural habitat.

Now, Scott Dowd has been nominated for the 2018 Indianapolis Prize for Work with Beneficial Aquarium Fisheries. The Indianapolis Prize is given in recognition of the accomplishments of those working to help save and sustain wildlife populations and ecosystems, and is an important honor bestowed upon Dowd as well as 31 other global leaders this year.

As Dowd has stated in a press release, “The sustainable use of high-value aquarium fish enables people residing in areas of critical biological importance to thrive in a way that makes it essential to preserve tropical forests and waterways.” We think so, too–and so will you, once you’ve checked out Amazon Adventure.