A Whale of a Discovery 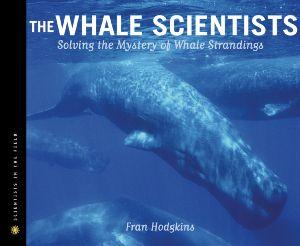 Humans have long wondered about the meaning of one of the humpback whale’s most distinctive behaviors, breaching. Why do these massive whales jump out of the water, only to come back down again?

In Scientists in the Field title [The Whale Scientists], author Fran Hodgkins alluded to this enigmatic behavior: “Is it a jump for joy, a way to communicate, or just an attempt to knock off whale lice? Future scientists may find out exactly why humpback whales breach like this, leaping out of the water and crashing back with a tremendous splash.” The Whale Scientists educates readers on the often-confounding phenomenon of whale strandings, which some scientists are trying to understand through the study of whale hearing and communication. Hodgkins points out that “whales can craft songs, communicate in dialects and even use tools” and that the complex hearing systems of baleen whales (which includes humpbacks), particularly, remain opaque: “Their ear structures differ from those of toothed whales. Some scientists think that sound is transmitted through the skull bones that surround the ear. Others think that baleen whales have more complex soft tissue routes that differ from but are parallel to those of the toothed whales.”

Well, just as Hodgkins predicted, future scientists have had a breakthrough! And, given the sophisticated way baleen whales communicate, perhaps readers won’t be shocked to find out that there’s more to breaching than meets the eye. In the article Scientists Finally Figured Out Why Whales Do Awesome Leaps Into the Air, Drake Baer writes about the new discovery that’s been made by marine biologist Ailbhe S. Kavanagh and colleagues. According to Baer, Humpback whales “aren’t just doing this to show off: According to a recent paper in Marine Mammal Science, the breaching serves as an acoustic telegram, communicating with far-off pods. It’s like how European or African peoples would send sonic signals from village to village via drum, or how wolves howl at the moon. Make a big enough splash, and the percussion speaks for itself.”

If you’re curious to learn more about wolves (and why they howl), check out SITF title Once a Wolf, by Stephen Swinburne, where you can learn facts like this: “Biologists think” wolves howl “to communicate with and locate one another before and after the hunt, to defend their territory from other packs, and to strengthen the social bonds within the family.”

If you’re dying to learn more about whales–and the many mysteries surrounding these animals that scientists are still investigating–check out The Whale Scientists! Can’t get enough of whales? Whaling Season, by Peter Lourie, follows arctic whale scientist Craig George as he studies the incredible bowhead whale–perhaps the oldest living mammal on earth, and another baleen whale–to track their health and population with the help of the Inupiaq people.