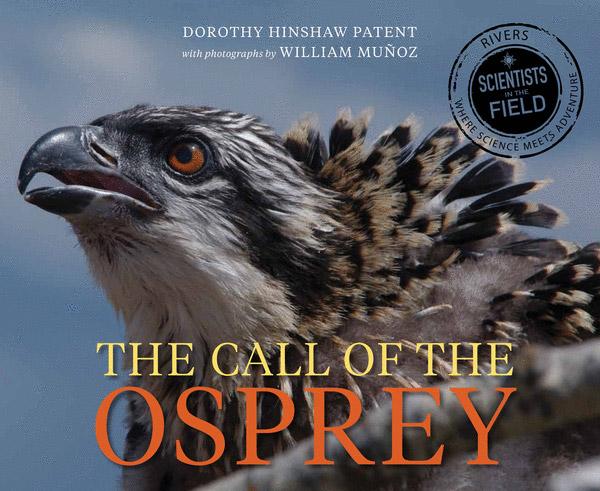 There’s lots of news to share about the osprey nests featured in The Call of the Osprey that shows how nature can bring surprises.

Last year, 2015, was a bad year for our birds. In the fall of 2014, Ozzie, the mate of Harriet at the Dunroven Ranch nest, was killed, possibly by an eagle. Harriet struggled to have a family in 2015, as a couple of potential mates came and went. She tried to incubate an egg, but without a mate to bring her fish, she had to hunt for herself. The egg couldn’t stay warm, so the embryo died. In the fall, a promising new mate for Harriet showed up. He was given the name Hal, short for hallelujah, a shout of joy that Harriet had a new partner.

Indeed, Hal and Harriet both arrived this spring and are now busy raising their two chicks, Honor and Glory. These names were inspired by the hatching of the eggs on the Memorial Day weekend. The best way to access their webcam is www.daysatdunrovin.com.

At the Hellgate Canyon nest, the 2015 season started well for ospreys Iris and Stanley. Then a violent hailstorm swept through Missoula Valley, destroying their eggs. By then, it was too late for the birds to raise a family. They stayed in the area, but had no chicks to care for.

This spring, Iris arrived as usual in early May. Stanley had always arrived a few weeks later, but this year, he didn’t show up. We’ll never know for sure what happened to him, but Erick Greene, biologist on the project, thinks Stanley was getting on in years and probably didn’t survive the winter.

What would happen to Iris? Would she miss yet another year of motherhood? While everyone waited in hopes Stanley would finally appear, however, a new mate, probably a young bird, courted Iris, and she accepted him.

Dr. Greene needed a name for Iris’s promising new partner, and he found a perfect fit. Here’s his note on the Montana Osprey Cams Facebook Page about how he found the perfect name:

Louis Adams led a full and rich life: he was a jockey when he was a young man; he was in the Navy and served the United States in the Korean War; after he returned he did many things including working in forestry on the Flathead Reservation. But Louis Adams was an amazing cultural leader and historian of his Salish people and this land. You can read more about this remarkable man at: http://missoulian.com/…/article_5265e5af-3679-5d2c-886f-c19…

At the groundbreaking ceremony for the new Missoula College right next to the Hellgate nest, Louis Adams was asked to speak. He gave a Salish blessing to the osprey nest and the new Missoula College building. After that he told us stories about how his Grandmother had been born and lived in a teepee right across the river from Iris’ nest. This land was the center of the homeland of the Salish people, and it was very moving to have Louis Adams bless this spot and Iris and her family.

Historic photo showing tepees in the Missoula Valley, like the one where Louis Adams’s grandmother was born. The town of Missoula now fills this land. Image Credit: From Archives & Special Collections , Mansfield Library, The University of Montana-Missoula.

So the “new guy” is named Louis after Louis Adams. I feel very lucky that we have Louis’ namesake now flying over the Clark Fork River, catching fish, and starting a new family with Iris. We send our sincere condolences and blessings to the Adams family, and thank them for graciously allowing us to honor the memory of Louis Adams this way.

As I write this, osprey Louis is incubating the one remaining egg on the nest, but it looks like this egg will never hatch. This is a disappointing outcome, but the bold between Iris and Louis is strong, so we can hope for chicks next year.